A tango DJ will soon find that as his collection gets larger it becomes necessary to organise it in a systematic fashion. There are many musical players that enable a systematic way of storing music, categorising it and tagging. Professional DJ software often comes with capable databases and many types of consumer software does so as well. I, for one, find that iTunes on a mac is excellent for handling a large database of tango music, especially when enhanced with a systematic way of organising and cataloging, making efficient use of its smart folder feature for one.

I will go into some the details of my system. Others may find something of use in them. Even though some of my practice utilises specific iTunes capabilities, most of them also apply to other music cataloging systems.

This image shows the the most important fields I use to catalogue and catagorize my music. I’ll enumerate every one and show how it is used in practice.

Name: This is the title of the tune, stripped of any additional information.
BPM: This is for holding beats per minute. I find it best to count the actual beats, around 120 in tango, 200 in vals and milonga.
Rating: This is an estimation of the quality of the song, in terms of interest, playability, and danceability. When first tagging a song I rely on Bernhard Gehbergers Tango-DB ratings, changing it to my own estimation when I’ve managed to work wirth the files.
Comments: I use the comments field for automatic generation of the key and BPM of each song, as read by Mixed in Key 8. When choosing between different copies of the same song, I also put a «reject» mark in the comment field of the ones Iðm not using.
Work: This is an iTunes field I use in a nonstandard way, for the exact recording date of the tune.
Grouping: This field I use when arranging songs into tandas. «C1» is a marker for the time period; «T» for tango as a genre; the number of the tanda; additional «(v)» for vocal; and finally a, b, c, or d according to the ordering of the song in the tanda.
Programme: This is used to document if the song was used in a milonga. When initially choosing songs when organising a milonga I give them a code, like +Þ in this case, an number for the order. This makes it easy to assemble in an autogenerated playlist.
Time: The duration of the song.
Artist: Here I place the singer first, followed by a «(v)» to indicate a vocal number; follwing that comes the bandleader. I differentiate between vocals and instrumentals with the (v). If the Artist field does not include a (v), the song is instrumental.

Organisation with folders and Smart playlists 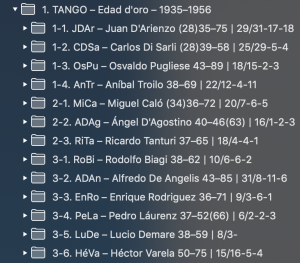 In iTunes I group all the music first according to the bandleader. Above is an example of a part of the collection. 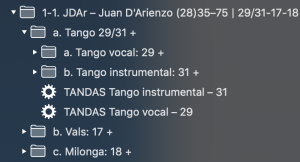 For every bandleader I also add folders for the separate genres, tango, vals, and milonga, with subfolders for instrumental and vocal tangos. 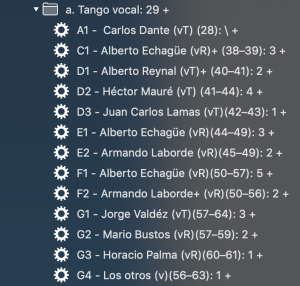 The vocal tangos are then arranged, via smart playlists, according to period (A, B, C, D, E, F, or G) and singer, with the years involved in parantheses and the number of tandas that heve been organised based on these lists. 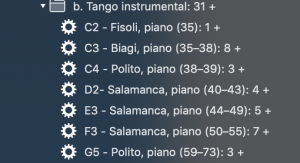 Instrumental tangos are ordered mostly by periods in smart folders, in D’Arienzo’s case according to his leading pianists.

This is an example of smart folder settings, giving all the D’Arienzo tangos with Héctor Mauré. The triangle marking in Comments is used to eliminate rejected versions and the rating is limited to 2 stars or more. 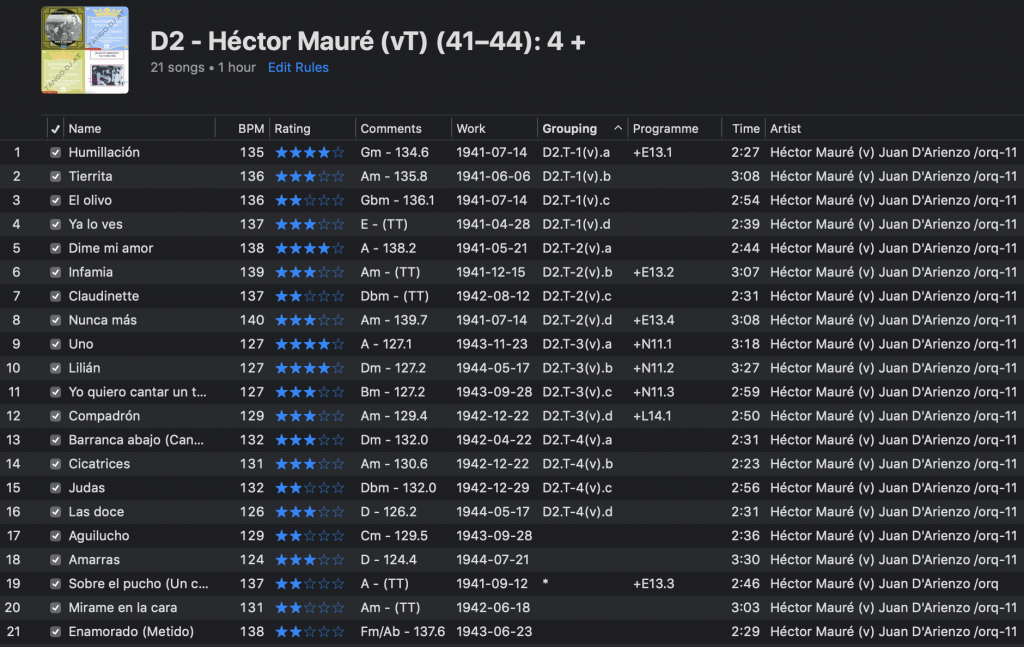 The above set of rules generates this listing of songs, with four organised tandas in all and indications of when they have been programmed.