It is common knowledge among DJs that there was a marked increase in the tempo of most recorded tangos in the beginning of the fourties. What interests me is to visualise in a more concrete manner the nature and extent of these tempo changes. In order to see better and quantify the extent and nature of these changes I have mapped these out in a graph. What is shown here is the beat-per-minute tempo of 4.847 tangos by 16 of the main orchestras of the Guardia nueva and the Edad d’oro. Onto the graph I have also drawn the general trendline, tracing a line through the densest areas in order to depict the main trends in a clearer way. 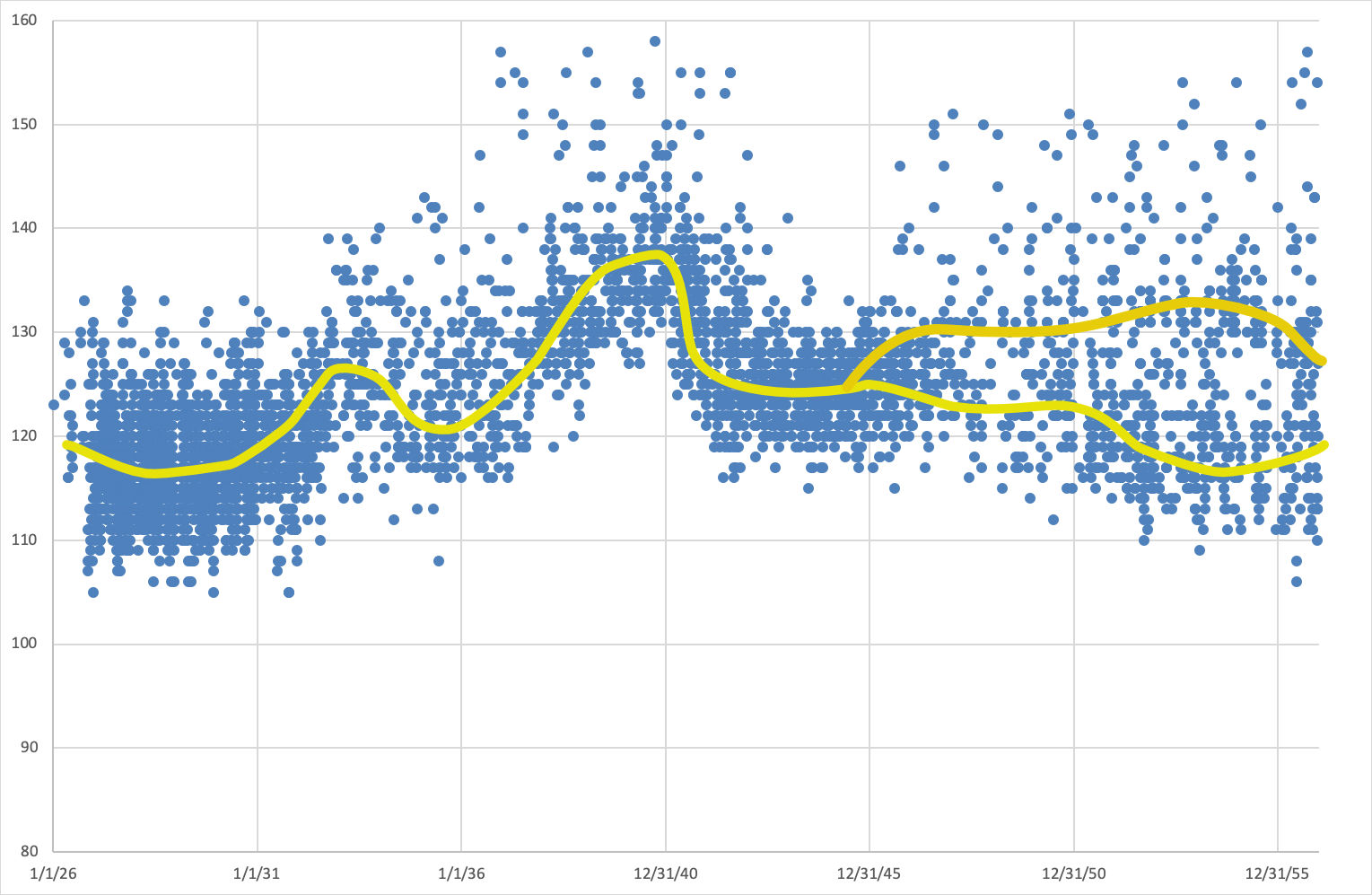 It is in 1936 that we see the first major change in the general tempo. That year the main trend rises from 120 to 124 bpm in a short period. At the same time the disparity in tempo increases a lot, with the general range being from 112 up to 143 pbm in some cases. In that sense we see that the first increase in tempo occurs in late 1936 when some bands started to experiment with a faster tempo even though the general trend was still on slower tunes. These experimental features seem gradually to become the general trend, with a sharp increase in faster tunes from 1939 to 1941. At the same time the slower tangos disappear, in 1940 thera are few below 125 bpm and almost none by 1941, when the slower ones are at around 130 bpm, with the average being around 137 and quite a few in the range from 140–150 bpm, which was rare before.

It is obvious that this period of intensity is relatively short, from 1940–1942. By 1943 there are only a few that run faster than 140 bpm, with most of the tunes falling in the area from 120–130 bpm, which seems to have become the de-facto standard for the rest of the decade. From 1944 until 1951 seems to be the period of most uniformity in tempo, with almost all of these recordings being in the range from 120–130 bpm.

In 1951, however, we can see the situation changing dramatically in that the disparity in tempo increases markedly. From 1951 to 1956 we see a number of slower tangos, in the range from 110 to 120, something rare in the previous decade. There are also quite many ranging from 132 up to 150 bpm, so we can say that the acceptable range has changed from 120–130 bpm to something like 115–145 bpm. Within this we can also see two areas of greate density, a branching between slower and faster tangos, the faster ones being around 130 bpm, with the slower trend being densest around 120 bpm.