Tango traces its origins to the popular culture of South America, to the area around the Rio del plata, River Plate, the bay that lies between Argentine and Uruguay, in the merchant cities Buenos Aires in Argentine and Montevideo in Uruguay. These two cities saw tremendous changes and progress in the final decades of the 19th century—they were a melting pot of diverse cultural influence. A lot of these originated directly in the cultural tradition of the inhabitants while others were brought there by those who immigrated to the area in scores. The harbour area was another focus of influence, where sailors from all over the world came to port. Most of these influences went undocumented which means that we will never with certainty be able to know for sure what the elements were that were the precursors of what we now know as tango. Still, there are some facts that can be deduced—from the origins of the influences and their nature.

The southern part of South-America was from early on characterised by the hybridity of its culture. The dominant feature of that culture were European, Spanish, and Catholic aspects and contact with the colonisers in Spain sustained that dominance up to the beginning of the nineteenth century. The cultural traits of the indogene part of the population was, however a factor in creating cultural identity. Though not evident on the surface these traits were an important part in the development of the distinct character of South American folk traditions, and thus the basis of tango. 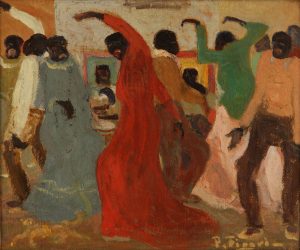 Black slaves were transported and sold in great numbers to South America in the seventeenth and eighteenth century, most of them from buntu tribes in the south-western parts of Africa. Their destiny was, like that of the Europeans and indigenous population, to become a part of the hybridity of the culture of the River Plate area, although there were for a while exceptions from this. It is documented that in Buenos Aires and Montevideo, the large harbour citied of the River Plate, blacks did manage to uphold their traditions at least partially up to the latter part of the nineteenth century. They had to a large degree merged with the general population by the beginning of the twentieth century. By that time, however, they had made their mark on the evolving trend that was to become tango. The word milonga has its origins in formal gatherings of the buntu groups in the River Plate area in the nineteenth century. It is also likely, though not uncontested, that the word tango also originates from buntu languages. Certain dance styles, especially in milonga, are also said to derive from the ceremonial steps of ubuntu dancing.

It is evident that popular music around Europe and in the Americas in the nineteents century was crucial for the evolution of tango. These were various musical styles that were carried across the Atlantic from Europe to North and South America and vice versa. Most importantly in this respect were various variations of popular dance music that evolved from the Contradanza, especially those that emanated out of Cuba in the latter part of the nineteenth century. The most popular of those was said to originate in Cuba and named after Havana, the habanera. The habanera is the single most important style that was a precursor of tango. The habanera beat is noticeable in the background of most tangos. The milonga beat, however, is in essence a rapid version of the main habanera beat. Contradanza and the habanera were also to be of great importance in popular music styles all over America, as the habanera beat was also foundational in the evolution of North American jazz, and from there on blues and rock music.

A  melting pot for tango

It is after 1890 that tango music and dancing became a distinct style. In the previous decades different cultural groups had gathered in the River Plate area, mixing diverse musical traditions. First there were the criollos, people from the surrounding area that were of mixed European, indigenous, and black origin. This group lived in the cities in close proximity with black people that to begin with kept some of their traditions. Into this atmosphere came sailors travelling from all over the world alongsite millions of immigrants, from Italy but also all over Europe. These people brought with them new influences, music, and dance traditions that mixed with the criollo folk traditions and ubuntu musical culture. It is from this diverse and rich mixture of influences that a distinctive style of music evolved along with a dancing style that became known to the world as tango.