As we’ve said before, there are many different ways to handle the DJ playing process, with many different software and hardware choices available. It is really comfortable to handle most tasks within the computer itself. One program that is able to do that, on a Mac, is Audio Hijack 3. It is a platform that enables you to take control of the audio interface of the computer, enhance it with plugins to route music from playback softare to chosen outputs. I’ve been streamlining the process while editing this wabsite. This is the present version of my setup: 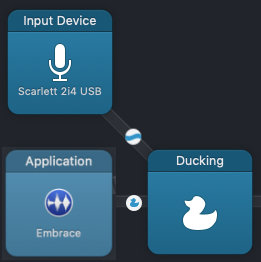 The first module are the inputs into the sound chain. In this setup there are two, Embrace, which is my preferred player program at the moment, and a dynamic microphone, plugged into one of the inputs on the Scarlett 2i4 external soundcard. The two inputs are linked to a ducking filter. It is set so as to output music from Embrace at full volume most of the time, while keeping the microphone input turned off. If, however, I speak into the mike the ducking filter automatically lowers the music so that I can speak over it.

When working with weak systems a compressor can be useful in order to increase the general sound of the music, as it can function to flatten the frequency curve of the songs and thus generating denser sound at lower volumes. This does change the balance between different frequencies in the songs and must therefore only be used with care. I use MCompressor, a plugin from Melda Productions, for eventual compression should the occasion arise. More on this in V.e.

The second part of the DJ chain is the parametric equaliser, used to individually adjust individiual tracks, correcting them for playback. This example uses MEqualizer from Melda Studios, the same we’ve been using for our examples of equalisation. It includes a handy visual interface where you can adjust equalisation and see how the sdjustment is affecting individual tracks being played. Track equalisation will be tackled in V.b and V.c.

The third element handles specific ecqualisation of the space the music is being played in.  In this case it is a solution from MathAudio called RoomEQ. This is a plugin that can analyse the acoustics of a space and equalise them out, creating a flat responce curve for playback by counteracting the diversion from uniform frequency in the speaker setup itself. This module accepts the equalised tracks from the parametric equaliser and modifies them for playback.

At the end of the chain I include a peak limiter, as a final security option. It is preferable to output the music from the computer at full volume, especially if the house speaker system is on the weaker side. The peak limiter functions to cut out any unforeseenhigh volume sounds that mightlead to distortion and damage the speakers.

The final part in the DJ chain is the output device. Here it is a Scarlett 2i4 USB which is used as a DAC. Channels 1 and 2 are used for the signal to  the equaliser/speaker system, with fine adjustments in volume done in the Scarlett device. We will go into this in better detail in part VI.a.

Above the main chain is a separate chain, comprising of an input from ITunes and another output to the Scarlett 2i4. This is used for prelistening tunes. They are routed to channels 3 and 4 on the Scarlett, connected to the headphone output on the device. When using a setup like this, care must be taken that system sounds are not set to output to the Scarlett device.