Once we have modified the music to our taste in the digital realm, we need to get that music in the most straightforward way possible to the speakers that output the music in a milonga. How we do that, however, can in many ways affect the quality of the music. To simplify things, however, it is good to keep in mind that when dealing with analogue sound, we can depend upon two rules of thumb: (a) pro equipment and cabling is as a rule superior to consumer equipment, and (b) shorter chains of equipment are preferable to longer ones. It is useful when organising your connections to speaker systems to keep this in mind.

Pro equipment can of course vary quite a lot, as does consumer equipment. There are crucial differences between the two. First of all pro equipment works with a stronger current, meaning there is more headroom to reduce noise and distortion. Second, pro devices connect with one another via balanced cabling, while consumer devices use unbalanced cables. The likelyhood of distortion and interference occurring in pro equipment is therefore much less from the outset, whatever the quality difference is. It is therefore advisable to use pro equipment as much as it is possible, and try to eliminate consumer products as much as you can from your sound chain.

We will now go briefly through the main elements of the analog audio chain that we’re usually faced with to output our music. It will in all cases start with (1) a digital analogue converter, possibly proceed from there to (2) a mixer, then to (3) an amplifier and speakers. In some cases you might encounter hardware equalisers, compressors, and venue equalisers between the mixer and the amplifier. As we have demonstrated how to use these in software, we will not consider them here.

The d/a converter is an essential piece of equipment in the sound chain, the piece that transforms our music from the digital realm of the computer into the analogue realm of the outside world. It is an integral part of most sound equipment. It is however important to be aware of the fact that the qulity of that conversion does however vary quite bit. Good converters have less distortion, a greater depth to the sound, and greater differentiation between instruments. They can have the same d/a conversion chips at their core as those of poorer quality, but differ in the amplifying circuits following that. To put it simply poor quality devices do not adjust against the distortion that are integral to the d/a chips as well as better designed equipment does. A good quality device is therefore necessary if you want to ensure the best quality at the beginning of the analogue chain.

This is an image of the front and back of the Focusrite Scarlett 2i4 computer recording interface. On the front it provides balanced inputs for 2 microphones and a headphone output. On the back ara a couple of pro balanced outputs, four unbalanced ones and a USB connection to connect it to the computer. For a minimal setup this device functions as a professional quality input and output interface, eliminating the need of other equipment.

If you are connecting the computer to consumer equipment, a quality consumer d/a converter should do just fine. It should however be noted that if the distance between the computer and amplifier is more than 5 metres, you could be facing considerable loss of quality if your connection is an unbalanced rca cable. For longer distances it is advisable to use balanced cables and convert to unbalanced at the amplifier via an balanced/unbalanced converter, that sonnects to the amp with a short rca cable. Thus one can secure a stable signal is stable all the way to the amplifier, something that is not possible over that distance with rca-cables.

When connecting with pro equipment, a mixer and speakers connected via balanced cables, I would recommend using a d/a converter that has professional balanced outputs. Even though professional mixers accept an unbalanced signal, via miijack or rca using the balanced input does secure better results. That is because if you connect via a weak unbalanced cable, the mixer will need to convert it to a balanced signal before output. That results in an additional module, which can depreciate the signal. In these cases it is advisable to use a d/a converter with balanced outputs, such as an external pro sound card. 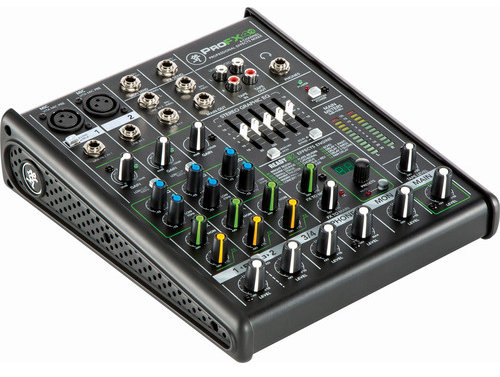 A simple Mackie 4 channel mixer, with both balanced and unbalanced inputs and outputs. House mixers can be much larger but for a milonga setup with a computer you would probably only use 2 line inputs plus an optional mike input. All effects would be set to neutral, with equalisation handled by the computer. The only adjustment you would be making on the mixer would be the sound level.

In venues with a pro soundsystem the interface to that system is usually some sort of mixer. One can usually connect to the mixer via a balanced cable from a pro d/a converter or an unbalanced one from a consumer converter. If one connects to the mixer via an unbalanced cable, the mixer amplifies the signal to transfer it to a balanced one. This involves more processing and therefore, to simplify the chain, it is preferable to connect a pro d/a converter to the computer itself.

In some cases the mixer is an integral element in a complex sound system. In these cases it can not be avoided to connect to it. In simpler systems the mixer is merely an interface to connect to the amplifier/speaker system. When the computer d/a converter is of professional quality, as in a pro external sound card, it may in these cases be preferable to bypass the mixer and connect the amplifier/speaker system directly to the sound card, simplifying the signal chain with possible improvements in quality. 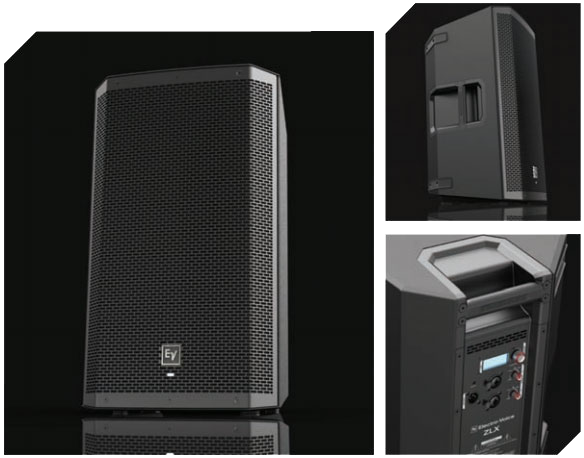 An active professional EV loudspeaker. On the back there are gain adjustments, a couple of balanced line-ins, a line out to chain-link to another speaker, and a minijack unbalanced line in.

As we’ve seen before, the main difference between consumer and pro equipment lies in the electric circutry, with pro equipment running on a higher current than consumer equipment, leading to them being less prone to distortion. There is another important difference between most pro equipment and consumer equipment. Pro speakers are usually designed to provide more-or-less uniform sound within a space, while consumer speakers are more often focused on a more central sofa-like experience. Thus pro speakers are commonly engineered sound well in a 90 degree horizontal range to both sides of each speaker, and within a 60 degree range vertically, thus providing good coverage when positioned either in the corners of a space or, alternitavely, in a four speaker array hung from the ceiling in the center. Consumer speakers usually have a much narrower range, with the tweeter, the speaker cone for higher frequencies often only sounding best at 10 to 15 degrees horizonally in front of the speakers. Consumer speakers are therefore usually set up so as to sound their best in a specific narrow range within the room, and thus not made for optimal performance in the entire space.

Professional speakers, however, also have their limitations. Igor «El Espejero» discusses these at length on his website. He warns against installing professional speakers with a 15 inch bass cone for milonga venues. In these the crossover frequencies, where the bass cone and the treble cone overlap, is in the most sensible area for acoustic tango music, leading to possible distortions and problems. He recommends the use of smaller speakers, with a 12 inch cone. I will not go into this subject further here, but rather point you to his article on this where he discusses different configrations of amplifier/speaker settings. You can find his article on milonga sound equipment HERE. Another good source for this is Richard Stoll’s website. He covers issues and equipment extinsively in a number of posts, HERE. Christian Tobler and Monika Diaz also provide interesting information about speaker setup on their site, HERE. Unfortunately it is only in German and quite difficult to navigate but the images say a lot about how the technical situation has evolved.