It is interesting to see how the bands that made the most recordings in the late twenties up to the early thirties, during the High and Late guardia nueva periods, evolved in tempo during their recording career. Some of these only recorded for a few years, while others started off strong, recordings becoming more sporadic as the Edad d’oro cicked in. Francisco Canaro is definately the survivor here, having started in the Late guardia vieja and continuing in force until the fifties. The images here plot the tempo of the tunes in a timeline running from the beginning of 1926 until the end of 1956, against a backdrop of what could be seen as the ‘mainstream’ of Argentine classical tango, the 9 main guardia nueva orchestras represented here as well as the 7 main edad d’or orchestras, D’Arienzo, Di Sarli, Pugliese, Troilo, Caló, D’Agostino, and Tanturi, a data set of 4847 recordings. 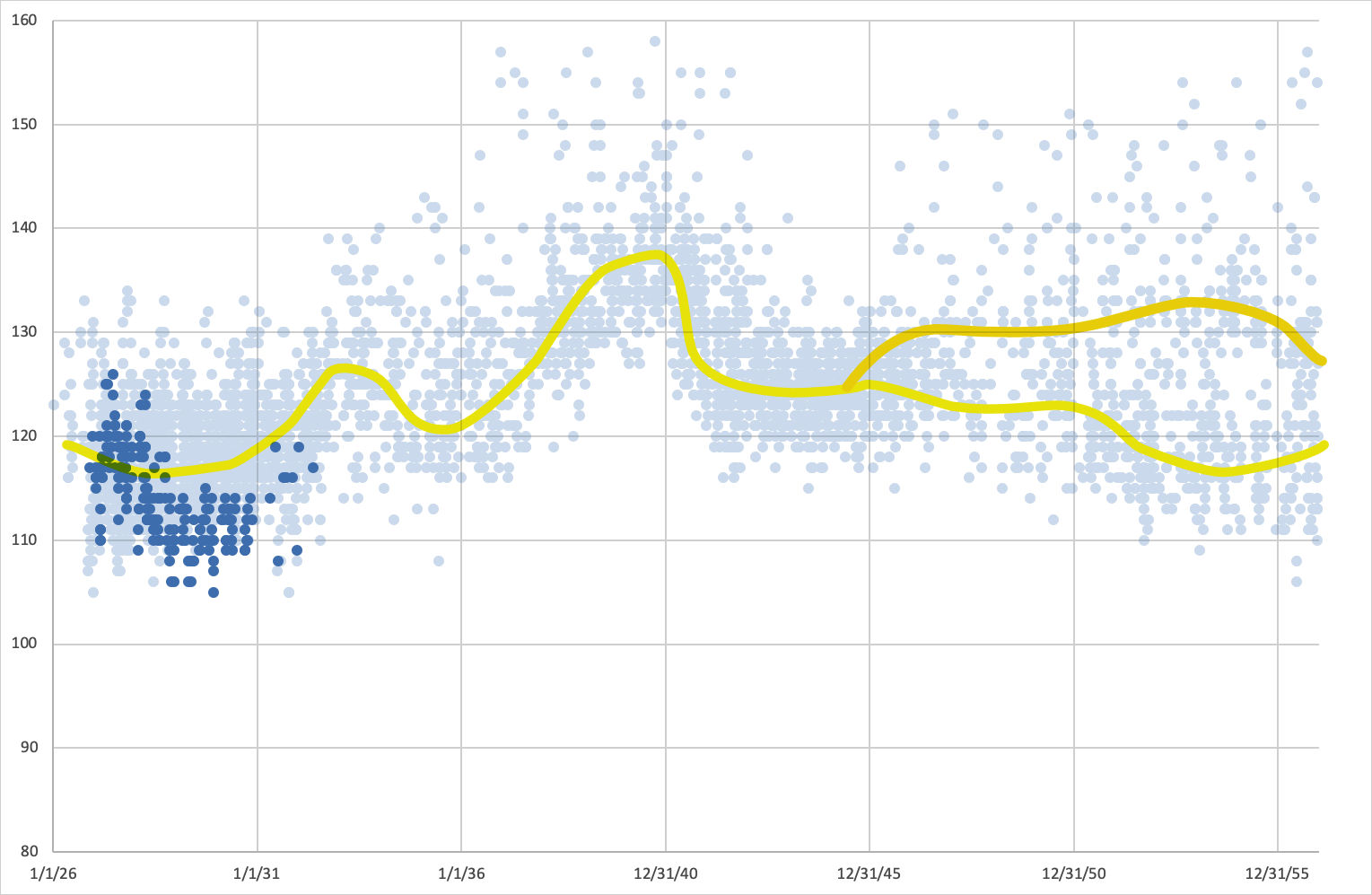 Juan Maglio ‘Pacho’ is one of the successful guardia vieja bandleaders that managed successfully to become part of the guardia nueva recording boom in the late twenties. We see that his tempo starts off as being average in 1927, 115–125 bpm, slowing down in 1928 to the level of 106–115 bpm, slower than the main trends. He continued sporadically to record after 1930, before his untimely death in 1934.

Luis Petrucelli was a guardia nueva bandenoist, who did a number of recordings, both with his own band and directing the Orquesta Típica Victor. His recordings follow the main trend in tempo, being for the most part 116–122 bpm. 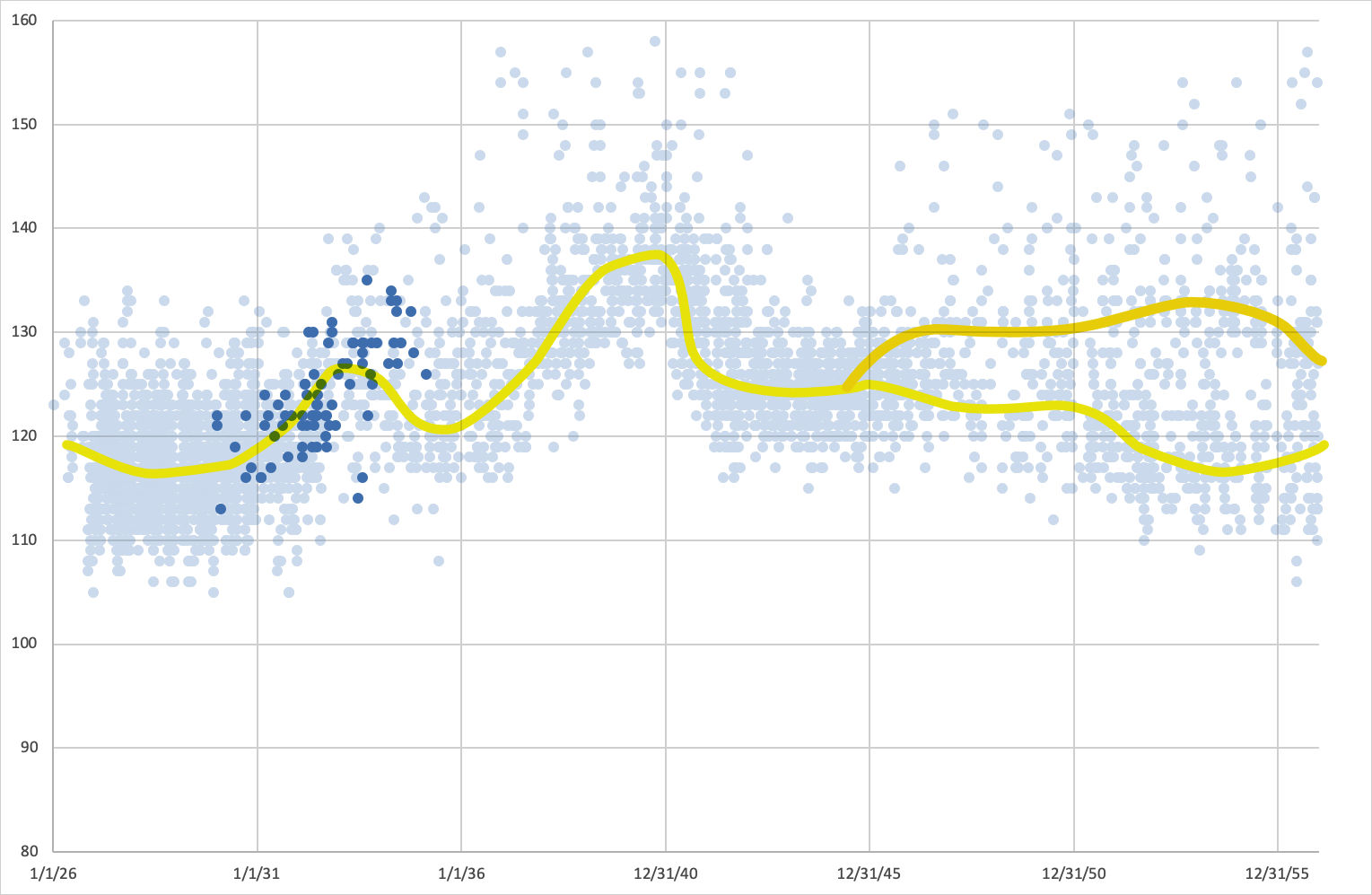 Adolfo Carabelli is another OTV bandleader, recording both with OTV, where he succeeded Petrucelli, and his own band from 1930 till early 1935. His orchestras show a steady increase in tempo, from around 122 bpm in 1920 up to 127–135 bpm in late 1934, being in the faster range at the time. 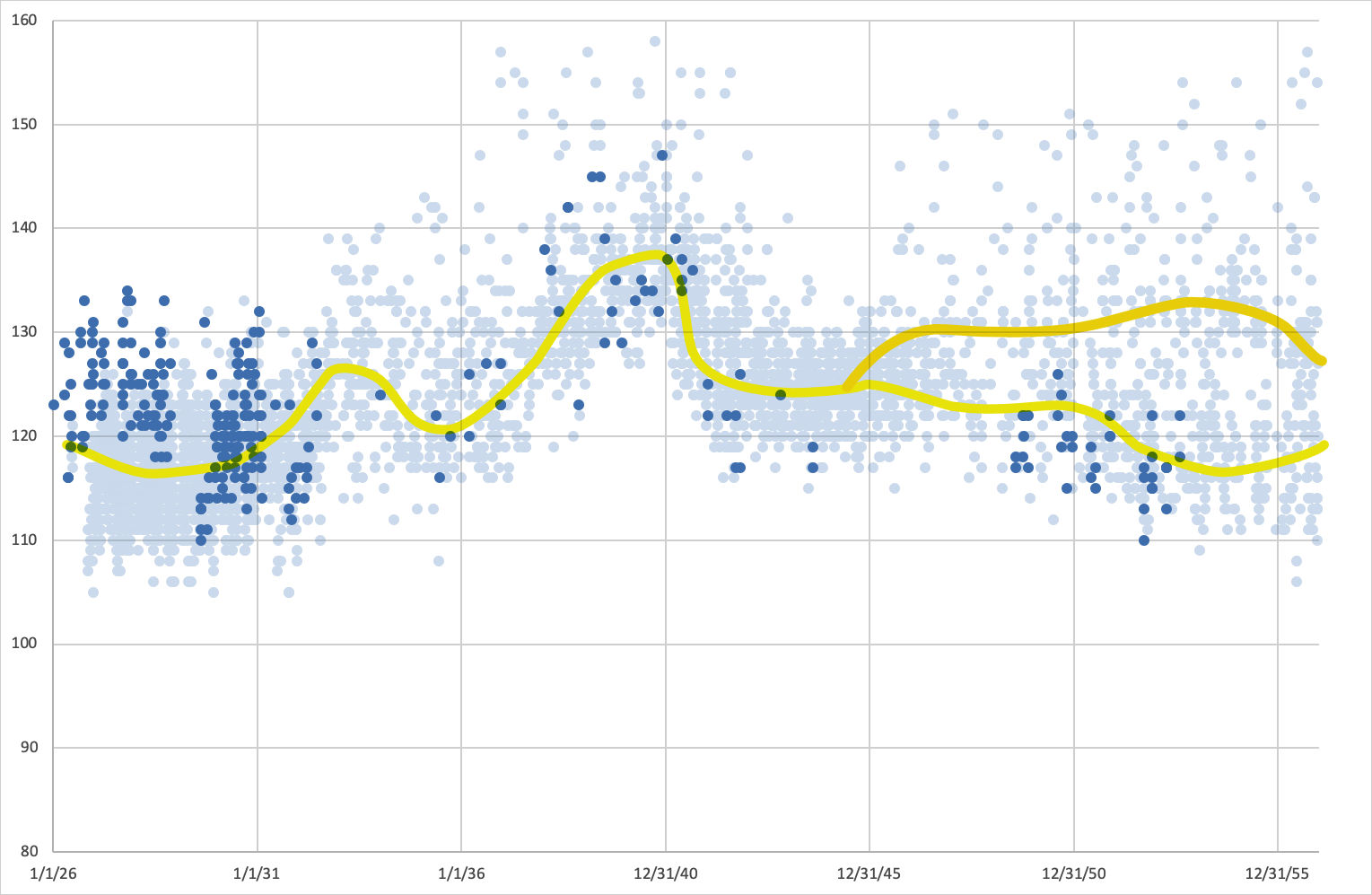 De Caro, known as one of the most innovative bandleaders of the Guardia nueva, was one of the bandleaders that managed, although with reduced output, to extend his recording career into the Edad d’oro. His recordings are most prolific up to 1932 and display a great distribution in tempo, initially quite fast, from 1926–1929, in the range of 118–134 bpm, after that becoming more diverse, from 110–132 bpm. After 1932 he records only sporadically, with peaks in 1939–1941 and again from 1949–1953. In these later recordings he, to the most part, follows the main trends in tempo, in the later period aligning himself with the slower style. 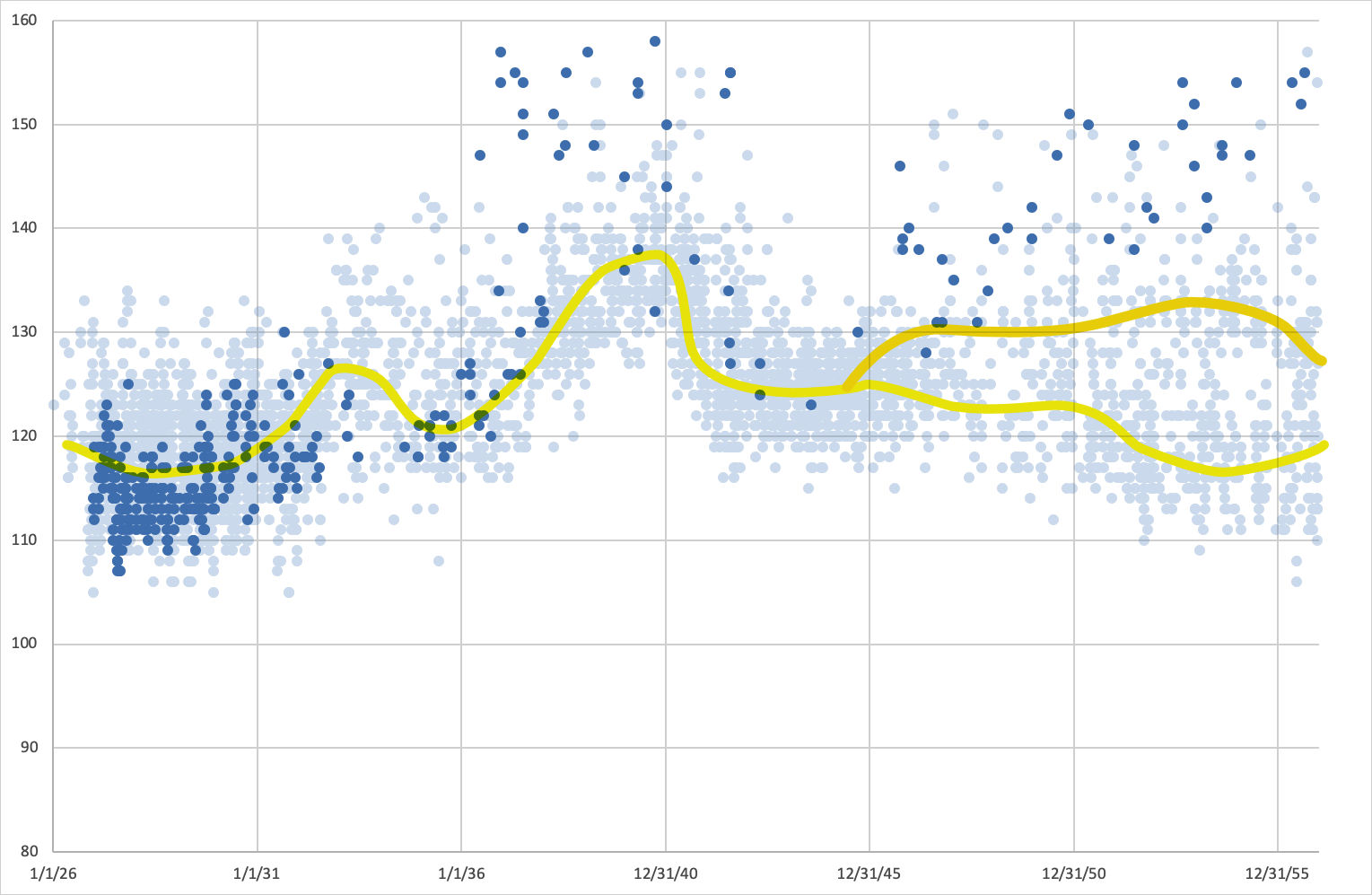 Firpo is a Guardia vieja master who managed to continue to record all theough the Edad d’oro. In the late 20s his recordings are in general slower than the main trend, running at 108–117 bpm. After 1928, and until 1936 his tempo follows the general trend. After that however, we see the effects of his work on reconstructing the ‘original’ sound and tempo of the Guardia vieja. From 1936 until 1956 his quintet recorded songs with a great variety of fast tempos, in the range of 137–158 bpm, much faster than the mainstream bands. 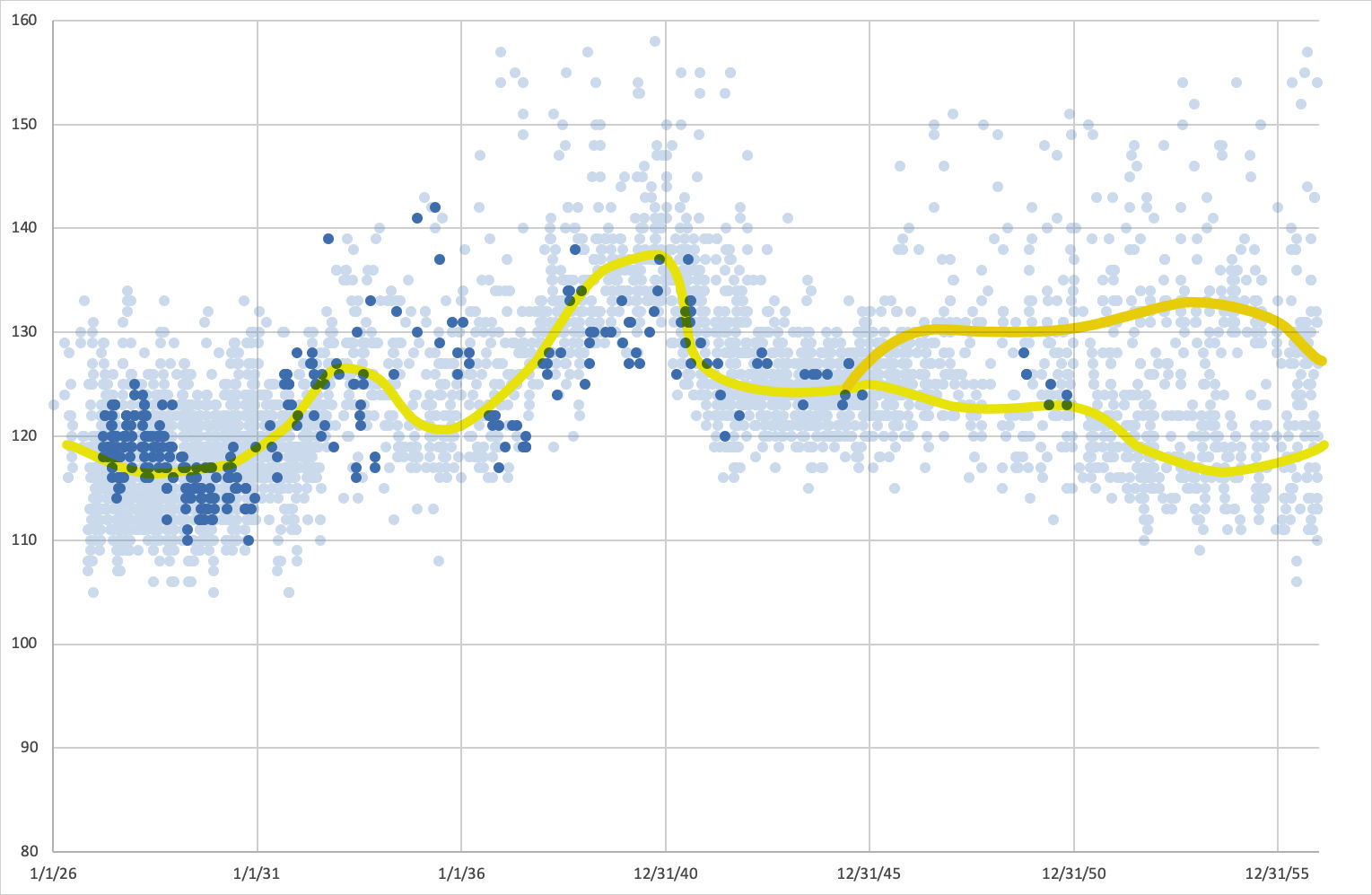 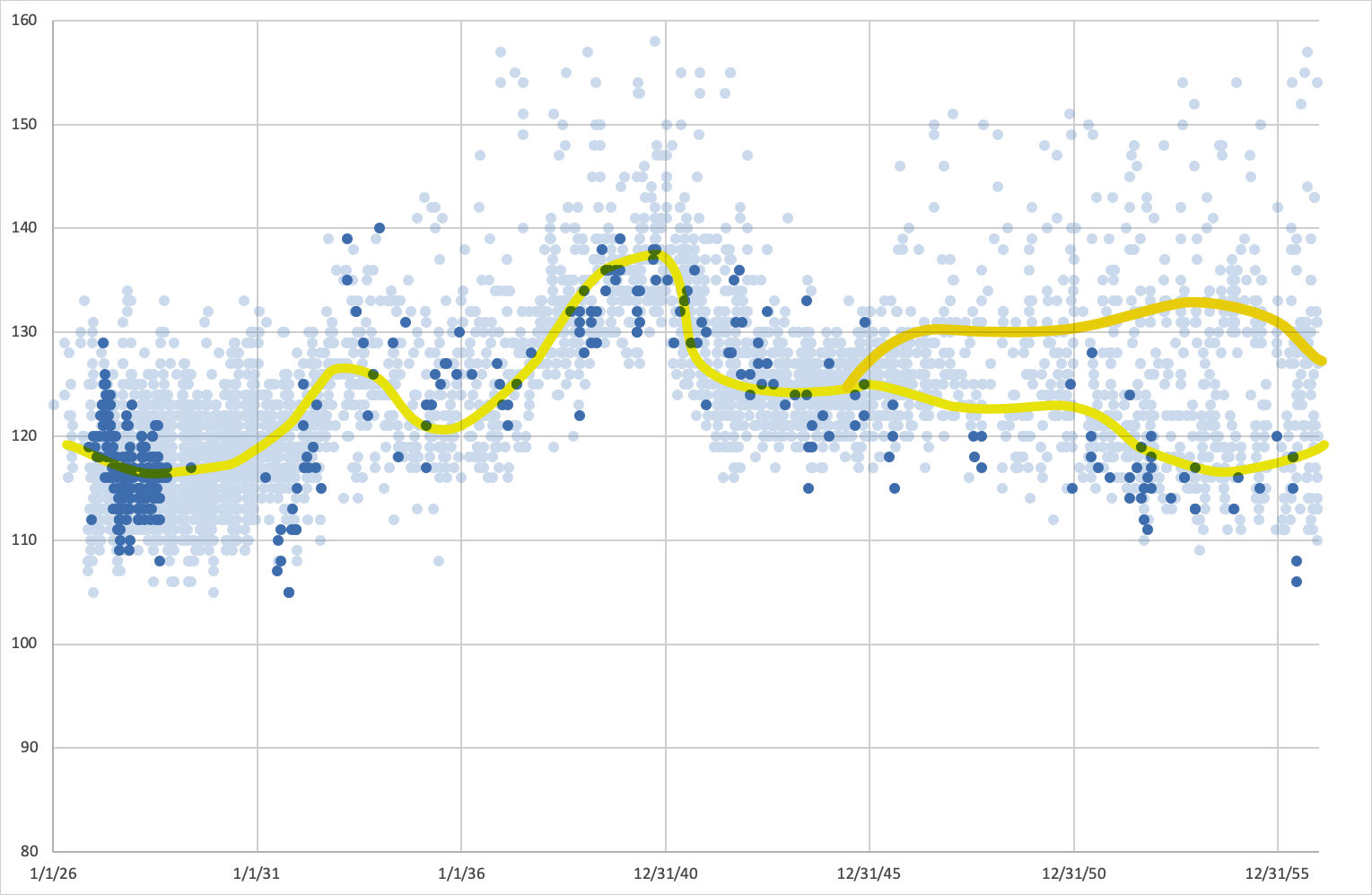 Donato’s beat from 1929–1931 follow the main trend of tempo, from 110–125 bpm. He, however, seems to be a precursor to the more rapid tempo of D’Arienzo, recording a number of songs in the range rofm 135–143 bpm from 1932–1935. from 1935–1937 his songs are in general are faster than the general trend. This trend catches up with him in 1938 and after that his output follows the trend until there is a gap in his recording from 1945. When he starts recording again in 1950 his tempo is variable, although it is in general more aligned to the higher tempo trendline. 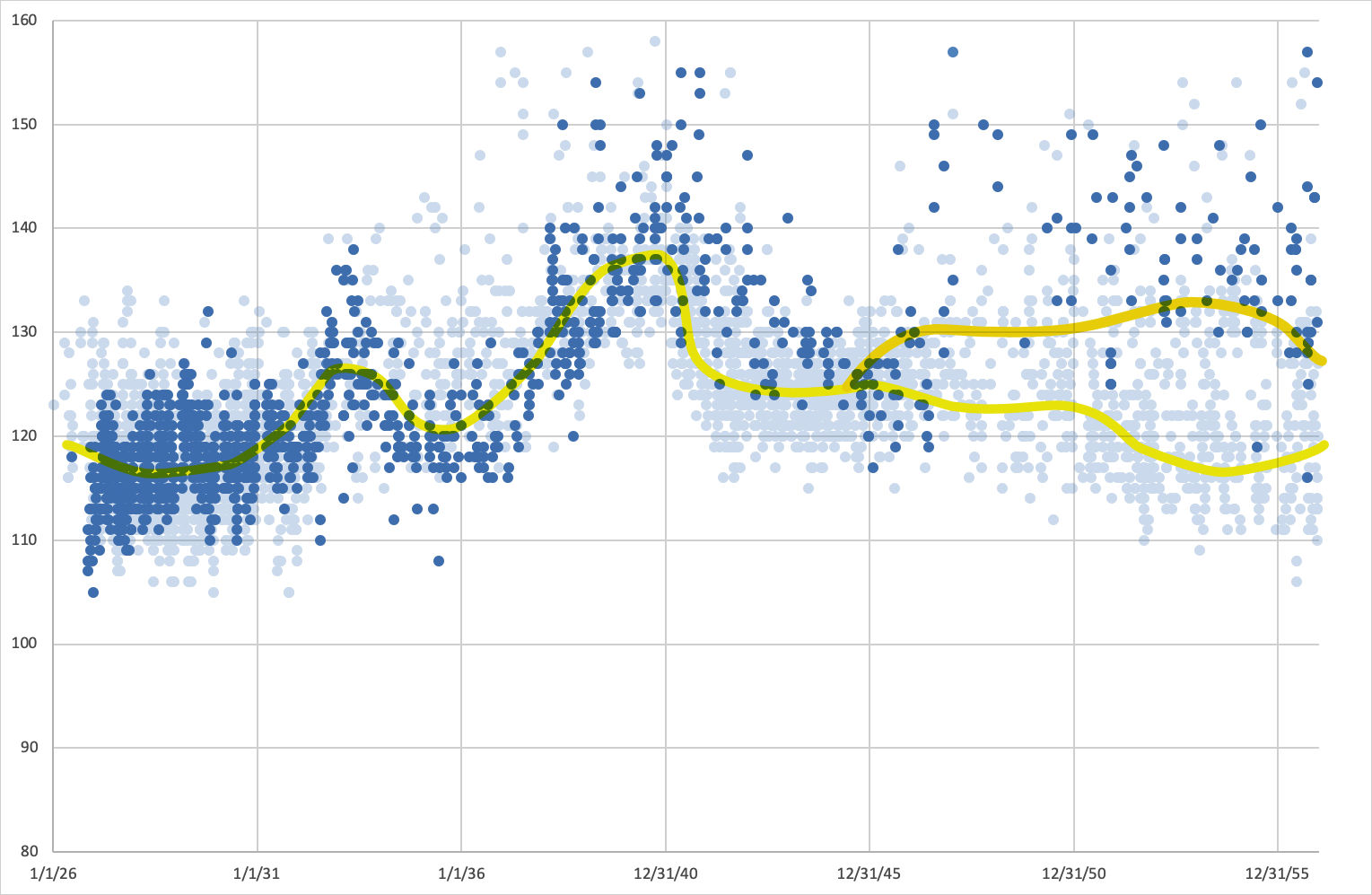 Canaro is a very special bandleader, a Guardia viejo performer that managed to keep on top of things all the way through the Edad d’oro. He is the most prolific recording musician from 1926–1935, definately setting the trends in that period. We see than his music is in the range 106–125 bpm in 1927, with the slower recordings becoming gradually fewer, so that his range in 1931 is 115–125 bpm. In 1932 and 1933  we see a greater variety in tempo, with a number of high tempo redordings, between 128 and 138 bpm. From that we can speculate as to whether he is uncessfully attempting to increase the tempo, this explaining the spike in 1932/1933, before dropping back to 115–125 bpm, aligning himself with the lower spectrum of the main trend until 1938, when we see an increase in tempo again. Between 1938 and 1947 Canaro’s Orquesta Típica follows the main trend, although on the faster side. Aside from that we can also see his engagement in the revitalisation of the Guardia vieja style with his quintets, this explaining the number of recordings with higher tempo from 1938–1941 and 1947–1956, with tempos in the range 140–157 bpm.